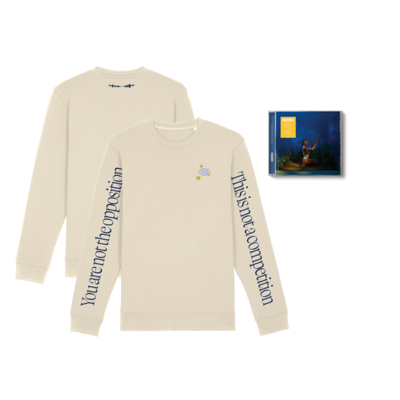 - 'Competition’ Crewneck on 85% Organic ringspun combed cotton with embroidered logo on the front, 'Competition' lyrics printed down the inner arm and an embroidered soundwave of the track on the reverse.

New York based singer, songwriter and producer Amber Mark announces details of her long-awaited debut album ‘Three Dimensions Deep’, out January 28th via EMI/PMR Records. Amber’s debut album arrives almost 4 years after the release of her second EP ‘Conexão’, an extended process that has proved central to its thematic development. The 17 track album can be divided into three main acts that follow the arc of Amber’s personal and musical development; WITHOUT, WITHHELD and WITHIN. Beginning by acknowledging her insecurities and anxieties before reflecting on her time in denial and spent processing them in all the wrong ways, Amber eventually widens her focus by seeking answers to the world’s negativity and trauma on a cosmic scale.